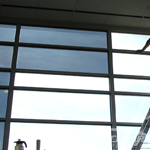 Seventy percent of the energy used in the United States is consumed in commercial real estate, and forty percent of the energy is used in managing the heating and cooling of occupied space.  Installing film on architectural glass that is utilized in building envelopes can be an important, cost effective component of an overall strategy to control energy costs associated with temperature control.  Low-emissivity (Low E) films are designed to capture heat from the building and redirect it back into the occupied space during the winter months, while reflecting solar heat away from the building in the summer months, reducing the effort required to cool the building.  Installing low-e film also minimizes exposure to harmful UV rays, can reduce fading of carpet and furniture, and can contribute towards attaining LEED points.  Everclear Enterprises, Inc. has installed hundreds of thousands of square feet of film on commercial buildings, including decorative film or frost, low-e film, security film, and blast-control film.  Further, by utilizing Building Information Modeling (BIM), a sophisticated energy analysis process that simulates projected energy savings due to window film installation, we can provide our clients an anticipated ROI schedule, allowing them to make an informed decision before committing to a strategy.