Water was entering several offices in the occupied space of this industrial property through the window system.  Upon inspection it was discovered that because the windows in these areas were located directly below roof-level scuppers, the regular presence of water had caused the lintels at the base of the masonry units above the windows to experience significant corrosion.  The resulting oxidation had pushed most of the mortar out of the joint between the masonry units and the supporting lintel, further exacerbating the problem.  Everclear removed the remaining mortar from these joints, as well as the first row of bricks directly above the lintels.  We used wire wheels to remove the corrosion from the lintels before coating them with a rust prohibitive primer and DTM enamel.  After re-installing the brick units and repointing with fresh mortar, we coated the exposed exterior edge of the lintels with enamel paint and installed backer rod and sealant in the outermost portion of the joint between the lintels and the masonry units directly above them to prevent the issue from recurring. 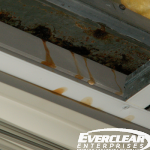 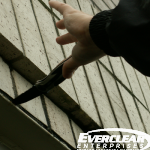 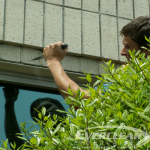 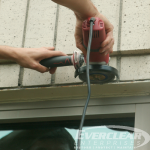 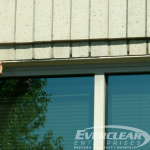 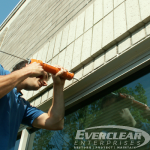