Many of the windows on this prestigious high-rise hotel / condominium tower in Atlanta’s midtown were badly damaged during the construction phase.  There were approximately 300 units that were scratched on the exterior surface.  After these units did not pass the architect’s inspection, the general contractor was facing the prospect of replacing them.  When factoring in the labor intensive aspect of physically removing and reinstalling these windows hundreds of feet above busy city streets, the associated costs were estimated at several hundred thousand dollars.  Everclear Enterprises, Inc. was called in to assess the situation and determine if there were any viable alternatives to total replacement.  Our solution involved utilizing a system that can successfully polish scratches out of glass surfaces.  Everclear assisted the general contractor in temporarily removing and rotating glass units not accessible by balcony, so that the repairs could be done from the inside of the building, saving tens of thousands of dollars in access and clean-up costs.  We were able to salvage over 85% of the damaged windows, saving the general contractor a substantial amount of money in the process. 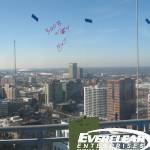 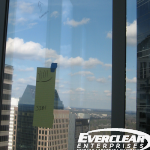 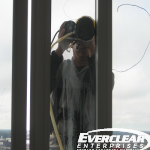 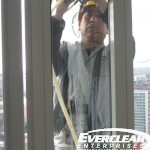 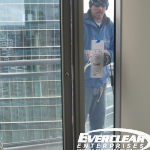 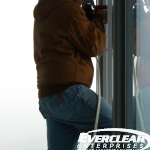 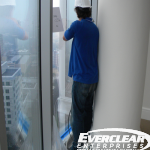 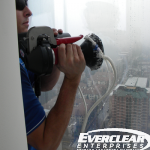