The three enclosed stairwells on this parking structure were experiencing significant water intrusion, resulting in widespread corrosion of the entrance doors at all levels, as well as the stair nosing, risers, and handrails.  Due to sustained exposure to moisture, the coating on the block wall had completely broken down.  The horizontal surfaces throughout the three stairwells were moldy and very slippery, exposing users to a possible slip and fall hazard.  Everclear’s solution included replacing the sealant in the vertical control joints on the exterior walls of the stairwells, as well as cleaning and applying a water repellent to the exposed aggregate surfaces.  We also installed a French drain at the perimeter of the stairwell enclosures to route water away from the lower level, which was below grade.  On one of the stairwells, we installed a trench drain in an exterior sidewalk that was allowing water to enter the lower level of the stairwell underneath an exterior door.  We removed the existing coating from the interior block walls, and after installing a cementitious waterproofing material on the below grade surfaces, applied an elastomeric coating to the block walls in all of the stairwells.  We removed the corrosion from all steel surfaces and then treated those steel surfaces with a rust prohibiting primer before recoating with a DTM enamel.  Finally, we installed a pedestrian traffic coating to the exposed horizontal concrete on each stairwell. 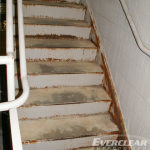 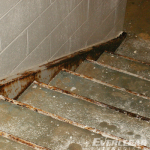 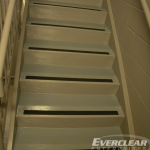 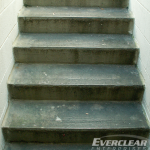 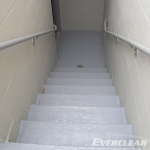 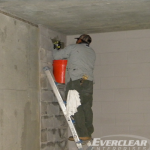 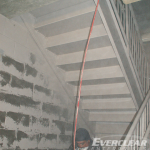 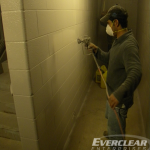 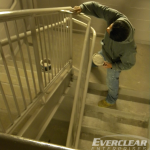 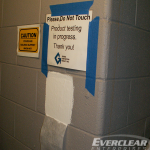 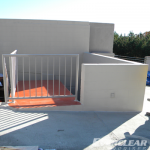